Will of the Wisps

None
Willow's End is the final location found in Ori and the Will of the Wisps.

It is the very Spirit Willow of Niwen itself. The Decay has ravaged this once-majestic heart and guardian of Niwen to the point where it is now a rotting husk of its former self that is on its last legs.

Willow's End was once the Spirit Willow of Niwen, providing light for the land. It gradually aged and at last died, causing the land's light to shatter, which rendered it vulnerable to the Decay. It has since then become hazardous and infested with enemies of Niwen.

Willow's End is the last location Ori goes in Ori and the Will of the Wisps. It can only be reached after obtaining the ability Burrow, as the only path to it is blocked with sand. However, Burrow alone cannot fight the Willow's dangers, and more abilities are required to arrive to the top of it.

The water in Willow's End is a pink color, which kills Ori with one touch, similar to the grey liquid in Silent Woods.

After clearing all of the Corrupted Hearts, Ori goes to the top of the Willow, where Seir briefly receives the Spirit Willow who tells Ori that they must merge with Seir in order to save Niwen. As Ori and Seir are about to merge, Shriek appears and separates Seir from Ori. She then engages in a fight with Ori, in which Ori wins but is hurt. They then limp to Seir while reflecting on their past life, and merge with them, disappearing into a flash of light. This causes Ku to be healed, along with her wing.

Naru, Ku, Gumo, and a small group of Moki head to the site of Ori's merging, and witness Ori's spirit tree sprouting. Over the course of a number of years, Naru and Gumo help Ori's spirit tree grow. Naru eventually passes away, lying at the Tree's roots. Now having grown into a giant spirit tree, a spirit leaf flies away from Ori's tree branch to begin a new life. 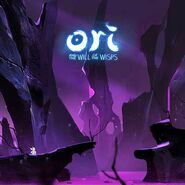 Retrieved from "https://oriandtheblindforest.fandom.com/wiki/Willow%27s_End?oldid=14826"
Community content is available under CC-BY-SA unless otherwise noted.