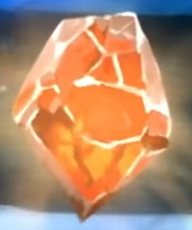 "With the Sunstone we can now pass through Mount Horu's gates. But do you feel the shaking, the rumbling in the earth? Mount Horu is close to spewing fire, there is no time to lose!"

—Sein to Ori, after the Sunstone is retrieved

The Sunstone is a legendary rune that can be found at the top of Sorrow Pass. It is the only known key to Mount Horu's gates, and must be recovered before Ori can progress to that area.

Crystalline, fiery orange, ablaze with almost harsh light, the Sunstone is kept in a massive crystal of the same color. As Sein implies, the Sunstone seems to protect itself, warding Kuro off with its intense light.

After Ori escapes Kuro in the Forlorn Ruins, Sein reminds them that the Element of Warmth must be reignited. Sein says that the Sunstone can be found at the top of Sorrow Pass, and that they can ride the winds to travel there.

Through a labyrinth of dangerous puzzles, Ori eventually floats to the very peak of the Pass, where the bubbling volcano can be seen spitting lava in the distance. They release the Sunstone from the crystal, taking it with them back to Horu, which becomes accessible.

Retrieved from "https://oriandtheblindforest.fandom.com/wiki/Sunstone?oldid=12696"
Community content is available under CC-BY-SA unless otherwise noted.