Attack at close range with a blade of light

Spirit Edge has three primary means of attack: a quick horizontal slash combo executed by simply pressing the button it is assigned to, a launcher/overhead slash triggered with up and the button, and a downward slash usable in the air by pressing down and the assigned button. The launcher move can knock smaller enemies into the air, interrupting their attacks and rendering them vulnerable while they recover, while the first time the downward strike hits an enemy during a jump it will boost Ori up into the air, prolonging airtime. Subsequent downward attacks will not have this effect, however: like air Dash, Ori has to touch the ground or perform a Bash in order to reset it.

It is the first ability the player can get (excluding the Torch) and will be the only melee ability Ori has until another is purchased. It deals 4 base damage. Spirit Edge is an active ability which must be equipped to one of the three ability slots to be used, but does not drain Energy.

The ability is unlocked by absorbing it from an ancestral tree in the Howl's Den subarea of Inkwater Marsh. 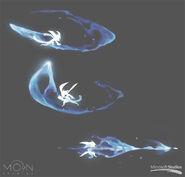 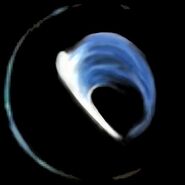 Spirit Edge icon
Add a photo to this gallery
Retrieved from "https://oriandtheblindforest.fandom.com/wiki/Spirit_Edge?oldid=13817"
Community content is available under CC-BY-SA unless otherwise noted.