The Sneeze Slug[1] is a type of enemy found in Ori and the Will of the Wisps. It resembles a yellow caterpillar with a white belly, sixteen legs, four eyes, a brown head like one of a hammerhead shark's with four horns and two antennae, a brown back, and a swallow-like tail. Sneeze Slugs can be found in Inkwater Marsh, Kwolok's Hollow, and Midnight Burrows.

When it has not sensed Ori, they will move back and forth in a pattern like a slug. When it has, they will stop moving back and forth, turn in the direction of Ori and immediately move towards Ori in attempt to attack. If they are too far away, they will stop and start firing yellow-green projectiles from it's mouth, and after three projectiles it will continue moving forward to attack. Once it is close enough, or has been damaged, it will release a circular yellow aura that is similar to the ability Flash and harms Ori, and keep attacking until Ori dies, the Sneeze Slug dies, or Ori is out of it's range of sight. When defeated, they combust in a flash of yellow light, which will harm Ori if they are caught too close.

Sneeze Slugs can be killed with three smashes of the Spirit Smash, seven hits of the Spirit Edge, six arrows of the Spirit Arc, three Light Bursts, three Launches or one Spike. They deal half a Life Cell of damage on contact, and two with the aura, two by projectiles, and three on death explosion.

Sneeze Slugs can be hard to kill, especially because they have powerful melee and ranged attacks and high health. To kill it, the player must maintain a safe distance away from the Sneeze Slug to avoid the yellow fumes, but has to also dodge projectiles and attack at the same time. However, the player can stay away from the slug and wait for it to fire projectiles, then bash the projectiles back in the direction of the slug to damage it. The player can also bash the slug into a hazard, but cannot lure it into them.

Sneeze Slugs give fifteen to twenty spirit light upon death. 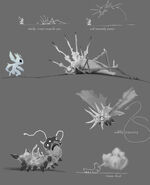 Retrieved from "https://oriandtheblindforest.fandom.com/wiki/Sneeze_Slug?oldid=13977"
Community content is available under CC-BY-SA unless otherwise noted.