"She guarded the silence...and silence was kept."

Shriek, also known as The Stone-Wing, was an Owl, and is the main antagonist in Ori and the Will of the Wisps. She hatched within the Silent Woods after the death of the Spirit Willow and subsequent Decay overrunning the area, and had extreme deformities thanks to its corrupting effects. She has a layer of stone on her body, and walks on two tall stalks that seem to have replaced her wings rather than walking on her feet, which she allows to hang under herself instead.

⚠️ Spoilers Ahead!
Shriek's Biography contains spoilers for content in Ori and the Will of the Wisps! Continue at your own risk.

In her early life, she sought to find friends and somewhere to call home. However, after rejection by the Moki, and more critically, the Owls, she returned to the Silent Woods. These experiences ultimately led to Shriek actively trying to silence those she thought would reject her. This included several attempts at killing Ori and Ku to prevent the light of the Spirit Willow from being rejuvenated.

Some time after hatching and venturing out, she came across the new nesting grounds for the Owls. Here, she came across three owlets that were very curious of her. Things were going well, until their parents had landed in the defense of their children and forced Shriek to leave. This was likely due to the corruptive nature and high spread rate of Decay, which her body was covered in. She posed a hazard to the lives of everyone there, a victim by circumstance.

Upon encountering any Moki, it was not uncommon for them to run away at the sight of her. The Moki were terrified of her.

Immediately upon Ori and Ku's crash landing in Niwen, Ori sought to find Ku. Eventually, Ori was led into the Silent Woods, where they eventually found Ku. While in the Silent Woods, Shriek was always close by, crushing Moki huts beneath her talons in search of food or any life to extinguish. In part of this journey, she flew off after hearing Howl in the distance. Eventually, Ori would come across the now solid stone corpse of Howl, implying Shriek had almost effortlessly killed him.

Shortly after Ori found Ku, Shriek would uncover the the two, swiftly engaging them in an attempt to eliminate them. She began by attempting to stomp on Ori, which missed and opened a hole into a large cave below, inadvertently allowing the spirit to escape from her clutches. Whilst clawing at the pit in an attempt to reach Ori, she was interrupted by Ku pecking at one of her stone stilts. She would fling Ku off of it, cornering her over the edge of a cliff, only to stomp down on her, almost[2] resulting in her death.

Following this event, Shriek would frequently antagonize Ori as they moved throughout Niwen to find the Wisps. She could be seen circling the skies of Baur's Reach, and when Ori claimed the Memory of the Forest at the peak atop the mountain, she promptly arrived and attacked. This attack triggered an avalanche, and as it occurred, she pursued Ori down the mountain, swooping in to try cut the spirit down as they fled the snowfall. Eventually Ori fell over the edge off a cliff as the snow tumbled after them, and for unspecified reasons, Shriek left the area.

Shriek would also spend her time the Feeding Grounds, guarding the path between the Silent Woods and the Windswept Wastes, closely investigating any noise Ori made as they crept across the area to reach the desert beyond. Though she eventually discovered the spirit as they neared the Wastes and promptly attacked, she accidentally triggered a rockfall as Ori fled into a cave, preventing her from reaching her prey.

As Ori and the recently-restored Seir made their way back across the Feeding Grounds to reach the Willow's End, Shriek yet again descended upon them in another attempt on Ori's life. As she was about to crush Ori, Seir repelled the owl with an incredibly powerful burst of light, knocking her to the ground. Seir was going to deliver a finishing blow, however Ori held Seir back from attacking further in an attempt to relay that they did not want to hurt Shriek, and would rather be seen as friendlies. Shriek unfortunately rejected this implied offer, seemingly distraught that someone would even make such an offer in the first place.

Shriek returned for a final battle at the Willow Tree. After Seir had briefly revived the Spirit Willow and began her flight back down to Ori, Shriek swooped in and caught Seir out of the air, disabling her and tossing her into The Weeping Ridge.

After a prolonged struggle between the two, Shriek was bested by Ori and fell from the sky towards the ground, crashing into The Weeping Ridge. With what remained of her strength, she flew back to her old nest in the Silent Woods, where she nestled herself beneath the wing of one of her parents, before succumbing to her injuries and quietly passing away.[1]

Note that these ability names are not officially mentioned, and have been given fan-assigned names for the sake of readability.

The following is a list of all attacks Shriek uses in her boss fight. A fan-made walkthrough exists as well.

Phase #1 occurs while Ori is on the platform where the battle begins. All abilities mentioned here are reused for all phases unless mentioned otherwise.

Phase #2 occurs on a platform to the far right once Shriek is at 75% health. Some previous attacks from Phase 1 are reused, with some minor alterations, namely:

Phase #3 begins when Shriek is at lower than or equal to 10% of her maximum health. At this point, Shriek will break the ground from left to right till there is no more, restricting Ori to an aerial battle. There are a number of alterations here as well. It also implements a new ability.

Shriek, as an egg

Shriek, as a child

Shriek, in the feeding grounds 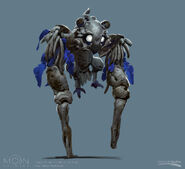 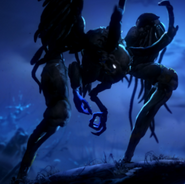 Shriek picture.
Add a photo to this gallery

Retrieved from "https://oriandtheblindforest.fandom.com/wiki/Shriek?oldid=16054"
Community content is available under CC-BY-SA unless otherwise noted.