"With the Spirit Willow's passing, my light faltered. Now I am whole once more. I am Seir."

—Seir, introducing itself to Ori

Seir is a supporting character in Ori and the Will of the Wisps. A creature containing the power of the Spirit Willow, Seir acts as a guide to Ori during their journey to restore Niwen. With the Spirit Willow's passing, Seir was split into five wisps and shattered across the land, leaving Niwen vulnerable to Decay. The Decay killed all Spirits of Niwen, leaving the Willow without an heir to inherit Seir and become the new spirit tree of Niwen to restore life to the ancient forest. But it was foretold that a Spirit would one day appear to inherit the Will of the Wisps to become the new heart of Niwen.

Description (The Will of the Wisps)[edit | edit source]

Seir was split into five wisps before being shattered across Niwen with the death of the Spirit Willow: The Voice, Memory, Eyes, Strength, and Heart of the Forest.

Voice of the Forest[edit | edit source]

The Voice of the Forest is the first wisp obtainable from Kwolok when Ori meets him for the first time in Kwolok's Hollow. Through its voice, it guides Ori throughout the journey and introduces the lore of Niwen from time to time. Its voice resembles Sein, the light of the Spirit Tree in Nibel. After a devastating ambush by Shriek leaves Ku barely alive and badly hurt, the voice tries to help heal Ku, but in its dying state, all it could do was surround her in a field of magical flowers that acts as life support.

Memory of the Forest[edit | edit source]

The Memory of the Forest can be obtained at the top of Baur's reach, hidden inside a Spring Blossom tree. After the chase sequence, Baur reveals that his memory wakes up from it and proceeds to tell Shriek's tale.

Eyes of the Forest[edit | edit source]

The Eyes of the Forest can be obtained in Mouldwood Depths, where Mora the Spider resides. When the Decay happened, Mora became corrupted and stole the wisp when "her mind was not her own". After defeating Mora, the wisp creates an aura of light that heals Mora's corruption and removes the darkness previously roaming the entire area.

Strength of the Forest[edit | edit source]

Heart of the Forest[edit | edit source]

The Heart of the Forest is the most fragile wisp among the five and protected inside the deepest floor of the Windtorn Ruins built by the Gorlek after the Decay. It is the last wisp obtainable in the game after Ori opens the entrance to the ruins with the other four wisps. After obtaining the wisp, it combines with the other wisps and becomes whole again as Seir. Shortly afterward, a giant sandworm appears and a chase sequence is triggered which guides Ori and Seir to escape the ruins.

Once out, Seir clears the sandstorm and points to their final location: The Spirit Willow itself. When Ori and Seir were on their way to Willow's End, Shriek once again appears to attack them, preparing to stomp Ori when a fully restored Seir strikes her back with its power, knocking Shriek off her feet and damaging her skull helmet. Ori stops Seir from attacking Shriek further and attempts to befriend her. However blinded by her past, Shriek rejects Ori's show of warmth and flies away towards Willow's End.

Eventually, they reach the top of the old Willow, where Seir merges and briefly revives the ancient tree. The Willow reveals that it can no longer bear Seir due to its time being at its end. It then reveals that in order for Niwen to be saved, Ori must accept their true destiny by embracing Seir's light in order to replace the dying Spirit Willow at the cost of Ori's old life.

Before Ori and Seir could merge, Shriek attacks the pair one more time, separating them, before engaging Ori in a grueling duel for the fate of Niwen that tore the dying Spirit Willow and Weeping Ridge asunder. Ori successfully defeats Shriek, but is also left exhausted and hurt in the process. Ori limps their way to Seir and reflects on their past memory of their time with their family and in Niwen before accepting their new responsibility as Niwen's Spirit Tree in order to save Ku. Ori's sacrifice restores Niwen to life and heals Ku as well as her disabled wing.

Naru, Ku, Gumo, and a small group of Moki head to the site of Ori's merging, and witness Ori's spirit tree sprouting. Over the course of a number of years, Naru and Gumo help Ori's spirit tree grow. Naru eventually passes away from old age, lying at the Tree's roots. Now having grown into a giant spirit tree, a spirit leaf flies away from Ori's tree branch to begin a new life as decreed by the Will of the Wisps. 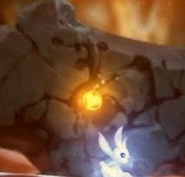 Seir in the Windtorn Ruins 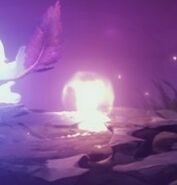 Seir about to merge 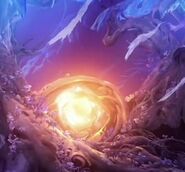 Seir atop the willow 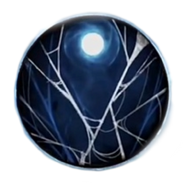 Eyes of the Forest
Add a photo to this gallery
Retrieved from "https://oriandtheblindforest.fandom.com/wiki/Seir?oldid=15201"
Community content is available under CC-BY-SA unless otherwise noted.