Rhino Beetle is a type of enemy found in Ori and the Will of the Wisps. It is black with a tinge of blue, and resembles a rhino beetle with a glowing yellow abdomen. It has six legs, spikes on it's back and head, and glowing eyes. They can be found in Kwolok's Hollow and the Wellspring. It's behavior is similar to that of the Rammer in the Blind Forest.

If the Beetle crashes into a wall, it will pause for five seconds, allowing the player to attack it during this time. The beetle cannot be attacked from the front with weapons like Spirit Arc or the Spirit Edge because of it's shell, and must be attacked from the back. However, weapons like the Spirit Smash can directly impact the Rhino Beetle, without needing to attack from the back.

When attacked by the Rhino beetle, the player will recieve three life cells of damage. In return, the player can kill the Rhino Beetle with two hits of a Spirit Smash, six hits of the Spirit Edge, five arrows, two Light Bursts, two Launches, or one Spike.

The Rhino Beetle is not hard to kill after the player learns it's patterns. Dash is helpful, but not required, to kill a Rhino Beetle. Triple Jump, Bash and the Spirit Smash are also helpful.

An alternative way is to grab onto a wall and wait for the Rhino Beetle to come near. Fall down and strike the beetle, then jump back onto the wall, wait for it to attack, then repeat until the Rhino Beetle is dead. The Spirit Shard Sticky is helpful for this method.

Rhino Beetles are bashable. When Ori attempts to bash them, the Rhino Beetle will not be affected, and Ori will launch out in the direction of the bash.

Upon death, the beetle will yield ten to twenty Spirit Light. 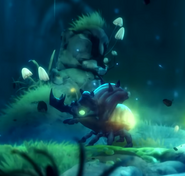 Add a photo to this gallery
Retrieved from "https://oriandtheblindforest.fandom.com/wiki/Rhino_Beetle?oldid=13725"
Community content is available under CC-BY-SA unless otherwise noted.