Owls are a species known in Nibel and Niwen.

Owls are dark purple birds with glowing yellow or white eyes and white or light purple faces. Owlets (baby owls) - are small in size, but adults are gigantic and extremely strong. They seem unable to speak, but are intelligent and can understand others.

Owls generally prefer the dark. Normal light is not harmful to them, but light generated from the Spirit Tree can be deadly for them, especially owlets. While not necessarily evil, they can be very territorial and protective of their families and their dead.

In Nibel, the only known Owl family was Kuro and her four children.

In Niwen, there was once a large abundance of Owls, but they were driven to near extinction when the Spirit Willow lost her light. While some had left their former home now known as the Silent Woods, those that remained became petrified into lifeless stone. 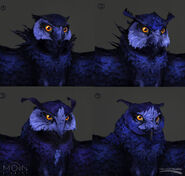 Adult Owl variants by Mikhail Rakhmatullin
Add a photo to this gallery
Retrieved from "https://oriandtheblindforest.fandom.com/wiki/Owls?oldid=13386"
Community content is available under CC-BY-SA unless otherwise noted.