"When Naru embraced my light as a child of her own..."

—Spirit Tree, in the Prologue

Naru is a creature of an unknown race and Ori's effective "foster mother". When Ori became separated from the Spirit Tree during the Great Storm, Naru discovered the young spirit and raised it as her own child.

Naru is a large and slow being. She has a very large spotted belly and her arms, chest, head and back are covered with black fur. Most of her lower half is a lighter shade of purple while her face is pure white.

Naru is very motherly, caring and affectionate, especially towards Ori. She shares many personality traits with her parent and with the earlier days of Kuro, who both loved and cherished their children. Naru is also shown to be very determined and selfless, striving to find Ori even as Nibel was burning around her.

Ori and the Blind Forest/Definitive Edition

Before the events of the main game, when the Spirit Tree was only a sprout, Naru lived in the Lost Grove beneath the Black Root Burrows as a child with her father. She quickly became friends with Eki and Sol, the Spirit Guardians, playing games with them and embracing the union of light and dark their friendship created. However, Naru's father did not approve of this and promptly separated them.

As the years passed, Naru remained with her father in their nest where she would be taught various skills the older she grew. When she returned home after trying to gather food one day, Naru found her father on the ground having passed away. Mourning her loss and with no reason to remain in her home, she left the Grove in search of a new place to belong.

Many years later during the events of the Great Storm, Naru observes from afar at the edge of Swallow's Nest when she sees a glowing form float overhead. She follows it until it lands and transforms into Ori. Sensing that the tiny creature is the same as the ones she was friends with in her youth, she embraces Ori and henceforth becomes the only parent they ever knew.

Some time after finding Ori, Naru and her child work together in order to find more food for themselves by building a bridge to a bountiful collection of trees. That very same night, the Spirit Tree calls out to Ori, filling the skies with light. Frightened by the sudden event, Naru hurries Ori into their cave to protect them.

Later on, Naru ventures out to find more food, only to discover that the forest has withered and decayed. Unable to collect food from the highest tree branches, Naru returns to the cave and gives Ori the final piece of fruit they have left, not caring for her own needs. When Ori ventures out and comes back with food, Naru is unresponsive. After trying to wake her, Ori realizes that Naru has died of starvation while being away. Mourning the loss of Naru, Ori leaves the Nest, mirroring the actions of their mother many years ago.

Naru is not seen again for much of Ori's journey. In the Definitive Edition of the game, Ori is able to explore the Black Root Burrows and Lost Grove to discover more about her earlier life.

After her child receives the Sunstone, Naru's inanimate form still remains on the cave floor. Gumo, having been inspired by the Spirit Guardian's selflessness and courage, brings the shimmering Light Vessel from the Forlorn Ruins near her. The object resurrects Naru from her slumber and the smiling Gumon leads her outside. The pair gaze past the dying forest to observe Mount Horu, which seems ready to burst at its seams with molten lava. Naru and Gumo descend from the pinnacle, making their way to the bubbling volcano.

Naru and Gumo journey close to Horu where the land is slowly burning from the mountain's fire. Naru manages to climb up a small cliff, but she and Gumo are separated when two flaming rocks crash between them. Naru waves to the Gumon before running off, wishing solely to see Ori again. After Ori rekindles the Element of Warmth and is knocked unconscious by Kuro, Naru pushes herself through the burning trees to cradle her child in her arms in defiance of her father's dislike of her union with the light. Her motherly affection affects Kuro, forcing the giant bird to realize her mistake of attacking the Spirit Tree. In the distance, Kuro's egg is slowly getting engulfed by the flames. Kuro returns Sein to the Tree and sacrifices herself in the same way that Naru did for Ori to save her child, and restores Nibel to its former glory.

After the Spirit Tree rebalances the Elements and Ori returns to the Spirit Tree to observe their kin being reborn, Naru and Gumo watch from afar with pride at what Ori has accomplished. Returning back to her cave, it is revealed that Naru has adopted Kuro's unhatched chick and comes home just in time to witness it start to hatch.

Shortly after Ku's birth, Naru, Ori, and Gumo help raise Ku in Nibel for the span of a few years. Shortly after Ku and Ori fly away from Nibel, Naru and Gumo travel to Niwen to search for the pair, finding a dead Ku in the process. Shortly after Ori merged with Seir in order to restore Niwen, Naru and Gumo witness Ku's revival, with her deformed wing restored to a healthy state. The trio head to the site where Ori merged with Seir and help Ori's spirit tree grow, making the spot their new home until an adult Ku takes flight on her own.

Naru passes away peacefully from old age while resting on Ori's tree.

Young Naru and her father

Naru mourns the loss of her parent 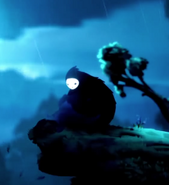 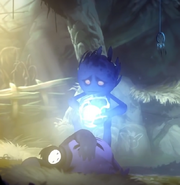 Naru, Gumo and the Light Vessel 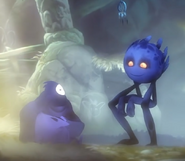 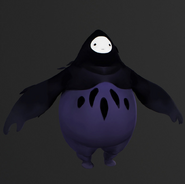 Retrieved from "https://oriandtheblindforest.fandom.com/wiki/Naru?oldid=12242"
Community content is available under CC-BY-SA unless otherwise noted.