"All of Niwen will suffer as Mouldwood has. You must be strong, spirit."

—Mora to Ori, after being defeated

Mora is a giant spider who resides in the Mouldwood Depths along with her many children. When the Spirit Willow lost her light, Mora sealed the entrance to their domain to protect herself and her children, but the Decay affected the darkness within Mouldwood. This caused Mora and her children to become corrupted, resulting in Mora becoming tainted with corrupted fungus that turned her hostile, stealing the Eyes of the Forest for herself.

Before Ori and the Will of the Wisps[edit | edit source]

Prior to the events of Will of the Wisps, Mora was either born into or took up residence in Mouldwood Depths, giving birth to a large family of many spiderlings. When Niwen's Spirit Willow died however, the Decay was able to infect into her domain, afflicting both Mora, her brood, and even the very darkness within the depths itself. As a result, Mora became corrupted, coveting the Eyes of the Forest which fell into her lair, and sought to kill any outsiders. Prior to their own corruption, her children sealed the entrance to the depths.

Freed from the Decay[edit | edit source]

Eventually, the Spirit Gaurdian, Ori, would arrive in Mouldwood Depths, seeking the Eyes of the Forest. Creeping up on them from behind, Mora struck the ground around Ori, casting them deeper into her nest before leaping down to fight them. Ori would ultimately escape from the lower section of her nest, prompting Mora to give chase back to the heart of her nest, before continuing their fight.

Ori would ultimately best Mora in their encounter, causing the great spider to collapse to the ground in a heap, allowing the Eyes of the Forest to rejoin with the other Wisp/s, and the Darkness infesting Mouldwood Depths to lift. With the Darkness gone, Mora is awoken by her children. She expresses her gratitude towards Ori for releasing her from the corruption which clouded her mind, and tells them that, even for those dwelling beneath the surface, the light is necessary to provide balance for all, and that if it remains fragmented, it will dwindle and die forever.

Warning Ori that all of Niwen will suffer as Mouldwood did, she tells them that their presence brings hope, even in the face of growing Decay, and encourages them remain strong and go forth to seek out the wisps.

The following is a list of all attacks Mora will use during her boss battle;

Upon the conclusion of the escape sequence and transition into the second arena, Mora will gain these additional attacks;

Defeat Mora Without Taking any Damage 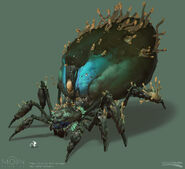 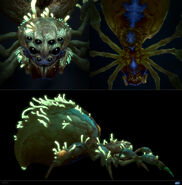 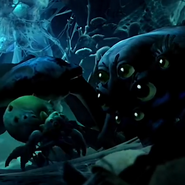 Mora and her children
Add a photo to this gallery

Retrieved from "https://oriandtheblindforest.fandom.com/wiki/Mora?oldid=15368"
Community content is available under CC-BY-SA unless otherwise noted.