"You are not a Moki, I can tell. Your ears are too floppy."

—Treasure Map Moki, Ori and the Will of the Wisps

The Moki are a species of small creatures in Niwen similar to ferrets, meerkats or lemurs. They are able to stand on two legs but run with four.

Moki are brown and white, with glowing yellow eyes and brown rings around them alike those of a panda, large ears, long bodies and a long tail with white on the end. They are approximately as tall as Ori.

Moki are commonly seen in the gloomy Inkwater Marsh (where their village is located) and Kwolok's Hollow.

Moki are harmless and helpful to Ori, but very shy. They are fast and agile, allowing them to avoid danger. Moki dislike bright light, preferring twilight, night and shady areas. They have a close relationship with Kwolok, the toad-like guardian of the Marsh, but greatly fear Howl.

Moki describe the Silent Woods as "the home we left behind".

There is a total of 17 interactable Moki in the game, not counting those in cutscenes.

When Ori first comes to Niwen, they are surrounded by a group of curious Moki. They are then frightened away by Shriek's calls.

After Ori's fight with the Hornbug, Moki will lower a vine for Ori.

After Ku is injured in Silent Woods, a group of Moki surround her and Ori. The Voice of the Forest fails to heal Ku and the Moki then tell Ori that they will watch over her.

In the Luma Pools, the Moki tell Ori that something is wrong with Kwolok. After fighting the Stink Spirit, the Moki witness Kwolok's death.

Prior to the becoming of Ori as the Spirit Tree, various Moki along with Ku, Naru, and Gumo take care of the tree, each one eventually fading away in turn.

Below are the lines of Moki in cutscenes. 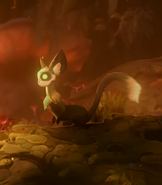 Retrieved from "https://oriandtheblindforest.fandom.com/wiki/Moki?oldid=14982"
Community content is available under CC-BY-SA unless otherwise noted.