"The haze of the Misty Woods deceived the minds of all... those lost within were never found."

—The Spirit Tree, just before entering the Woods

The Misty Woods are a large expanse of dark forest found to the very west of Nibel's borders, to the left of the Valley of the Wind. A place eternally shrouded in black, many creatures of Nibel have ventured inside and never returned. Ori must journey inside the Misty Woods in order to find the Gumon Seal and unlock the Forlorn Ruins.

The Misty Woods are a unique location as they do not have a map for Ori to reference as they journey through it. As they travel deeper into the trees, the layout of the forest itself changes with an ominous moaning of creaking wood, forcing Ori to backtrack through areas they have already passed through and see how they have changed.

Upon entering the Woods for the first time, Sein makes note of how an ancient object called the Shrouded Lantern is emitting the haze of the Woods' namesake and speculates that they can dispel it if they find a way to light the Lantern. Later on, Ori and Sein find Atsu's Torch, an item once thought lost in the woods and the key to lighting the Shrouded Lantern once again.

After finding Tatsu's Ancestral Tree and learning the Climb skill, Ori is successfully able to get Atsu's Torch and bring it to the Shrouded Lantern, finally clearing the mist and allowing them to see the map. Restoring the Lantern also gives them the Gumon Seal, the next step in their quest to rekindle the Elements of Light. 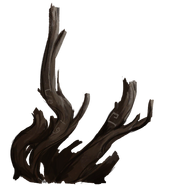 Add a photo to this gallery
Retrieved from "https://oriandtheblindforest.fandom.com/wiki/Misty_Woods?oldid=12361"
Community content is available under CC-BY-SA unless otherwise noted.