It will remain in place while idle. Once it does, it will pounce into the air three seconds after it has started it's attack in the direction of Ori. It will then fall down, smashing into the ground. If Ori is right below it when this happens, the player will get damaged and the Mantis will keep attempting to attack Ori, until it cannot sense Ori, it dies, or Ori dies.

Ori receives 8 damage points of damage when hit directly by the Mantis. If the Mantis hits anywhere else, the ground will slightly tremble but not impact Ori. Mantises can sense Ori from half of a screen away.

Mantises are easy to kill as long as Ori is moving, ensuring that the Mantis cannot jump onto Ori. A way to kill is to move to the side each time it jumps up, and strike it once it lands. It is also possible to kill it without moving, by waiting for the Mantis to pounce and when it does, the player can attack it when it is directly above Ori, knocking the Mantis back and damaging it. When it attempts to attack again, repeat until the Mantis dies.

Mantises will chase after the player even if there are hazards in it's way, so the Mantis can be easily lured to it's death. The Mantis can be bashed further then other types of enemies.

Mantises are instantly killed on contact with water, lasers, spikes, and other hazards.

Upon death, Mantises will drop ten to fifteen Spirit light. 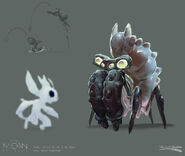 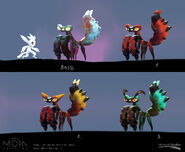 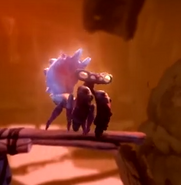 Mantis model variations by Tyler Hunter
Add a photo to this gallery
Retrieved from "https://oriandtheblindforest.fandom.com/wiki/Mantis?oldid=13661"
Community content is available under CC-BY-SA unless otherwise noted.