Light Burst is an active ability, and must be equipped to use.

Light burst is acquired by absorbing it from the Ancestral Tree in Baur's Reach. 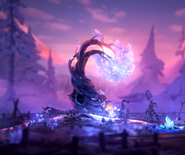 Ori standing next to the Light Burst Ancestral Tree

Retrieved from "https://oriandtheblindforest.fandom.com/wiki/Light_Burst_(Will_of_the_Wisps)?oldid=15151"
Community content is available under CC-BY-SA unless otherwise noted.