Turn yourself into a projectile (allows you to use Bash on yourself).

Launch functions in much the same way as Bash, controlling in the same way but not requiring a Bashable target to be present. Instead. Ori's current location is treated as the Bash target.

Launch can be used in the air or on the ground. In the air, Ori can only Launch once during a jump, reset by touching the ground, performing a normal Bash or using the Grapple. However, performing a Launch will reset all other jump moves (Double Jump and Triple Jump, Dash and the height boost on Spirit Edge's downward strike) in the same way as a Bash or Grapple would.

When Ori Launches toward an enemy, the enemy will get damaged for 5 base damage on contact.

Launch is an active ability, and must be equipped to use.

Launch is unlocked by the ability tree in Weeping Ridge, a sub-area in Silent Woods, which cannot be accessed until Ori has the ability Burrow. 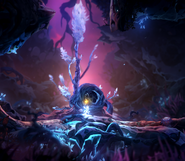 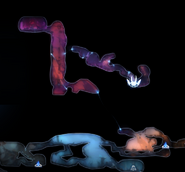 Launch Ancestral Tree map location
Add a photo to this gallery
Retrieved from "https://oriandtheblindforest.fandom.com/wiki/Launch?oldid=15036"
Community content is available under CC-BY-SA unless otherwise noted.