Ori and the Will of the Wisps
Kwolok, also referred to as the Guardian of the Marsh, was a giant toad who appeared in Ori and the Will of the Wisps. A very wise being, possessing knowledge of sprits, in his lifetime Kwolok acted as a guardian and overseer for the Moki when the latter creature's were driven out of their former home in the Silent Woods by Shriek, protecting them and the land from both Shriek and the Decay to the best of his ability, following the death of the Spirit Willow. He would later act as an ally of the Spirit Guardian Ori upon their arrival in the Forest of Niwen, aiding them in reuniting the Wisps to restore Niwen.

Before Ori and the Will of the Wisps[edit | edit source]

At some point prior to events of the game, Kwolok became the guardian of the Moki, providing protection for them after they were forced to abandon their former home in the Silent Woods, after the Decay and Shriek laying claim to the area. He would hold back the Decay over Niwen to the best of his ability and defend the Moki, although he was not capable of holding back the corruption completely.

Sometime after the arrival of Ori in Niwen, the Moki inform him of the spirit guardian's presence, as well as their quest to find their friend, the young owlet, Ku. Expressing surprise upon meeting Ori himself, Kwolok spoke to the spirit, informing him that Ku had fallen far to the east, in the Silent Woods, a place now devoid of Owls.

Kwolok explained to Ori that a nearby waterway once led to the woods, however the waters had "grown foul and impassable". He charged Ori with venturing west, to the Wellspring, in order to set its wheels in motion and allow the waters to flow once again, and gifted them with the Voice of the Forest in the hopes it would guide Ori through Niwen.

After Ori successfully restored the flow of water at the Wellspring, cleansing the corrupted water, Kwolok expressed his grattitude to the spirit, and informed them that the way eastward to the Silent Woods was now open. Though he would also warn them to be wary, as Shriek resided there, and prayed that Ori would find Ku before she did.

After Ori and Ku's encounter with Shriek left the young owlet at death's door, Kwolok spoke to Ori and told them of how Niwen fell into Decay following the end of the Spirit Willow, of how the great tree's light was fragmented and scattered across the land as little more than wisps. He warned them that, if left as they are, their light would eventually fade forever.

Thanks to the Moki however, Kwolok learned the location of the Wisps, telling Ori of their locations. The Forest's Memory, bound by frost in the North, its Eye's lost in darkness to the South, its Strength drowned in waters to the west, its Heart, buried in the shifting sands of the East, and finally its Voice which already journied with Ori. Telling Ori that if brought together, the Wisps can undo the damage wrought upon Niwen, he pledges his and the Moki's aid in the search for the Wisps, before leaving his hollow.

After leaving his hollow, Kwolok ventured west, to the Luma Pools, seeking the Strength of the Forest. Encountering Ori in his search, he tells them that the Forest's Strength is near, though that there was also a "familiar stench" as well. Stating time to be of the essence, he ventured further into the pools, and that they would speak again upon finding the wisp.

Kwolok was later found by Ori, corrupted by the Foul Presence that had previously disabled the Wellspring. Controlled like a puppet by the dark force, he swallowed the Forest's Strength and chased down Ori, eventually cornerning them further into the Luma Pools and doing battle with the spirit guardian. However, Ori ultimately bested Kwolok and the Foul Presence, and the toad guardian managed to regain control over himself, and crushed the vile creature beneath his foot, ending its threat for good. Unfortunately, his battle with Ori resulted in him sustaining lethal injuries, and in his final moments, Kwolok beeseches Ori to find and reunite the wisps, and watch over the Moki and the land of Niwen in his stead. At Ori's touch, he dissipated into light, releasing the Forest's Strength, allowing it to rejoin with the other wisps.

Given his significance in Niwen, Kwolok's passing was mourned by many of the residents of the Wellspring Glades. Grom remarked that things feel lonelier now, though he resolves to do his best to carry on Kwolok's work.

An alter was erected in his honour, within his hollow in Inkwater Marsh.

The following is a list of all attacks and abilities that Kwolok displays during his boss battle;

Upon reaching approximately 50% health, Kwolok / the Foul Presence will slam the roof of the arena, flooding it with water. This marks the beginning of the second phase of the fight, at which point Kwolok gains the following abilities;

Defeat Kwolok in Under 2 Minutes 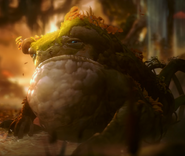 Retrieved from "https://oriandtheblindforest.fandom.com/wiki/Kwolok?oldid=15388"
Community content is available under CC-BY-SA unless otherwise noted.