"Kuro looms up ahead, won't allow us to pass. Let us not travel further, lest we unleash her wrath."

—Sein to Ori, in Valley of the Wind

Kuro is the main antagonist of Ori and the Blind Forest. She is a gigantic owl drenched in darkness, who despises the light. Kuro attempts to stop Ori from restoring the Spirit Tree along with the Enemies of Nibel.

Kuro is a massive owl with dark indigo plumage and a pale face. Her eyes are naturally an orange color until her corruption causes them to glow a bright white.

Though most of the game depicts her as being cruel, hostile, and vengeful, it is shown Kuro has a softer, more motherly side. She has a fierce passion to protect her unborn child and is fully willing to kill if need be to keep it safe from Sein's light.

Initially, the reasons for Kuro's actions are unknown, and she is described as having a "misguided will" by the Spirit Tree. Later on in the game, as Ori and Sein find Kuro's nest, they discover her true intentions.

As seen in Ori and the Blind Forest[edit | edit source]

⚠️ Spoilers Ahead!
This category contains spoilers for content in Ori and the Blind Forest! Continue at your own risk.

Towards the beginning of the story when Sein first explains to Ori why Nibel has decayed, Kuro is mentioned indirectly by both Sein and the Spirit Tree before her physical appearance as "she" and "her". Kuro's real name is not stated until later.

Ori first crosses paths with Kuro immediately after escaping the Ginso Tree, creating an impact that sends Ori flying off to the ground below. As they are falling, Kuro attempts to kill them, but Gumo saves them from her talons of hate. After restoring the Element of Winds, Ori and Sein discover Kuro's nest and the truth behind her actions. Kuro pursues them out of her home and back to the frozen wastelands near the Forlorn Ruins where Ori is narrowly able to escape.

At the climax of Ori's journey, Kuro arrives at Mount Horu to stop Ori from restoring the Element of Warmth. She chases them through the burning ruins of the nearby forest and stops them from reaching the Spirit Tree, knocking Ori unconscious. A revived Naru, having travelled to the mountain to find Ori, embraces her child and stirs something within Kuro. Seeing Naru in such distress reminds Kuro of her own grief, making her realize that her actions have made her into the monster she saw the Spirit Tree as. She takes Sein back to the Tree to restore Nibel's balance. As the Spirit Tree's light fills the realm, Kuro perishes in its glow.

After Nibel returns back to normal, Kuro's unborn chick is taken into Naru's care where it begins to hatch shortly afterwards.

Kuro is an extremely powerful foe, wielding abilities that prove to be the death of Ori nearly every time they cross paths. Her most effective weapon is her lightning-fast strikes, which are almost always unconditionally fatal except in instances where Ori can hide behind objects. In most instances that they have to confront her directly, Ori will have a limited time to escape Kuro's gaze or range before she will sweep in. In the Mount Horu finale, her pursuit is relentless, showing her stamina.

Despite having an immense amount of power and the advantage of size, Kuro is not invincible. A large enough object such as a hail of rocks can stun her and force her attention elsewhere. As a creature of darkness, Kuro cannot be exposed to the full power of the Spirit Tree's light. 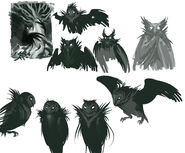 Storyboard sketch of Kuro feeding her young by Johannes Figlhuber 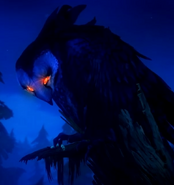 At the Top of the Ginso Tree

Kuro in the Definitive Edition Teaser

Airborn Studios 3D Model Back
Add a photo to this gallery

Retrieved from "https://oriandtheblindforest.fandom.com/wiki/Kuro?oldid=15912"
Community content is available under CC-BY-SA unless otherwise noted.