Ku is the only remaining offspring of Kuro.

Kuro's Egg has the familiar appearance of a normal bird's egg, being ovular in shape but uncommonly huge in size. In fact, it is bigger than most of the characters in the game, save for Kuro herself. The cream-colored shell of Kuro's Egg is speckled with dots.

When Ku hatched, Naru, Gumo and Ori came to see her. For some time they lived together in Swallow's Nest. With time passing, "the sky called to her", as Ori narrates. Ku couldn't leave Swallow's Nest due to her damaged wing, leaving her disheartened. Ori came up with a solution: with Gumo's help, they attach Kuro's Feather to Ku's wing, thus making her able to fly. During their flight through Nibel, Ori and Ku leave their home and fly towards Niwen, a forest across the water. A storm brews, separating the two and blowing away the feather.

Ku is revealed to have landed in the Silent Woods, searching for Kuro's feather while hiding from the woods' Enforcer of Silence, Shriek. After Ori finds their way to the Silent Woods, they reunite with Ku, and Shriek discovers them, hunting for them while they try to search for the feather to return home. When they find the feather on a branch in an open space, it is blown away by Shriek's wings as she corners them. She attacks Ori, causing them to fall into a pit, while Ku tries to attack Shriek to defend Ori. After flinging Ku off of her, Shriek walks over to Ku who is cornered at a ledge. Ku tries to stand up to her as Shriek crushes Ku under her stone wing, sending the owlet off the edge.

Ku is found and mourned over by Ori and the Moki in critical condition and brought back to Kwolok's Hollow and wrapped in a leaf. The Voice of the Forest surrounds Ku with a field of magic flowers trying to help her. However, as Kwolok explains to Ori, it is currently too weak in its own dying state to fully heal Ku. This is because with the Spirit Willow's passing, the light it carried shattered and scattered all across Niwen, leaving the forest vulnerable to corruption and decay. If The Will of the Wisps: the Memory, Eyes, Strength, and Heart of the Forest are brought back together in time with the Voice to reform Seir, the Spirit Willow's light and all of Niwen including Ku can be saved.

While Ori journeys across Niwen to restore Seir to full power, the Moki watch over Ku as the flowers around her slowly disappear, representing how much time she and the Light have left before death claims them and all of Niwen is taken by Decay. Naru and Gumo arrive and mourn her as the last of the flowers fade. However, before death could claim her, Ori fulfills their true destiny as the next Spirit Tree as they embrace the fully restored Seir the Golden Light, which restores Niwen and fully heals Ku and her wing. Ku stays with Gumo and Naru at Ori's tree site while helping Ori's tree grow until her adulthood before taking a solo flight on her own. 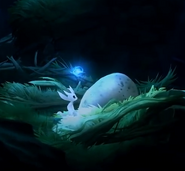 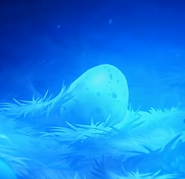 Flying to the New World

Ku being held by Naru after her birth

Retrieved from "https://oriandtheblindforest.fandom.com/wiki/Ku?oldid=14576"
Community content is available under CC-BY-SA unless otherwise noted.