Ori and the Blind Forest Wiki
Register
Don't have an account?
Sign In
Advertisement
in: Characters (Blind Forest), Definitive Edition, Characters (Will of the Wisps),
and 4 more
English

Gumo is a supporting character in Ori and the Blind Forest and Ori and the Will of the Wisps. The last known member of a race of builders known as the Gumon, Gumo initially embraced the darkness when the forest of Nibel went blind. Initially acting as an antagonist to Ori, the kindness shown to him by the Spirit would ultimately turn him into an ally.

⚠️ Spoilers Ahead!
Gumo's Biography contains spoilers for content in both Ori and the Blind Forest and Ori and the Will of the Wisps! Continue at your own risk.

Ori and the Blind Forest[]

Sometime after the fall of the Spirit Tree when the Forest of Nibel turned blind, Gumo elected to embrace the darkness on his own accord, rather than fight it. This led him to steal the Water Vein, an item necessary to access the Ginso Tree which housed the Element of Waters, though he was spotted by Ori and Sein in the midst of this act.

Gumo fled the duo, causing them to follow him. He ultimately led them to his hideout, where he pulled a lever as they were crossing a bridge, snapping it and casting them into the depths of his den.

As Ori pursued Gumo through his hideout, he eventually made his way back near the bridge at the top, where he pulled a level to trigger a rockfall in an attempt to either hinder or outright kill the spirit. However, this caused him to get trapped beneath a large rock himself, pinning him down and leaving him unable to flee further.

Ori ultimately reached Gumo's position, and despite his actions, Ori ultimately pulled the boulder off Gumo, freeing him. Ori's kindness prompted a change of heart in the lone gumon, causing him to voluntarily surrender the Water Vein to Ori.

Sometime afterwards, Gumo would later return to repay Ori's kindness further, saving them at the last second from Kuro during the formers fall from top of the Ginso Tree. Shortly after doing so, he leaves the pair and ventures off into the forest.

Sometime after saving Ori from Kuro, Gumo followed them and Sein to the Forlorn Ruins where they sought to rekindle the Element of Winds. Following the pair inside, Gumo is shocked and saddened to find the rest of his kind frozen to death, as a result of the Element of Winds corruption.

Whilst Gumo mourned his people's demise, he overheard Sein talk about honouring the memory of lost Gumon by restoring the ruins. Moved by Sein's words, Gumo elected to take the Light Vessel, before making the long trek to Swallow's Nest. With the Light Vessel's power, Gumo revives Ori's adoptive mother, Naru. With Naru returned, he found companionship and a place to call home, and the pair set off into the forest to find Ori.

Eventually, the activity of the volcano, Mount Horu, caused a forest fire to begin, briefly seperating Gumo from Naru and forcing them to part ways briefly in their search for Ori.

After the Spirit Tree was revived and balance restored to Nibel, Gumo watches the Spirit Tree from Swallow's Nest with Naru. Exchanging a brief glance, Naru returns to her cave, leaving Gumo alone to continue gazing into the distance.

Ori and the Will of the Wisps[]

Not long after Nibel's restoration, Gumo joined the family of Ori and Naru. Very shortly after, yet another addition would arrive in the form of a young owlet named Ku, last surviving child of Kuro. Gumo lived a peaceful and idyllic life with his new family, helping to raise Ku, making various additions to the cave in which they all resided, and encouraging the young owlet to try take flight from an overlook above the entrance to their cave.

Eventually, Gumo, alongside Ori and Naru, would help encourage Ku to truly take flight, watching her attempt sadly go awry in the process on account of Ku's deformed wing. Shortly after Ku's failed flight, Gumo fell asleep in a hammock outside the cave. Awoken by Ori, he would, at the spirit gaurdian's suggestion, attach Kuro's feather to Ku's injured wing, before watching as Ku reattempted to take flight, rejoicing and celebrating when she ultimately succeeded.

After Ori and Ku inadvertantly flew away from Nibel, Gumo would, in the company of Naru, create a raft and set sail for the Forest of Niwen in order to track the pair down and bring them home. They would later find Ku under the care of the Moki, and seemingly dead, in the forest. Whilst the two mourned the young owlet, they watched in amazement as she was revived, and her wing healed, thanks to Ori embracing Seir's light.

With Ku alive and well, Gumo travelled with her and Naru to the site of Ori's unification with Seir. Initially saddened by the apparent loss of Ori, Gumo ultimately smiled alongside his family after seeing the sprout of a new Spirit Tree grow from the ground, realising it was Ori's Spirit Tree.

Settling in Niwen alongside the rest of his family, Gumo would assist in tending to Ori's Spirit Tree, watching it grow from a young and small sprout all the way to a great tree, rivalling the one that cared for the Forest of Nibel, alongside watching Ku's continued growth to a full fledged Owl, witnessing her take flight on her own. Gumo is last seen helping Naru onto the base of Ori's Spirit Tree.

Discover the character in the shadows 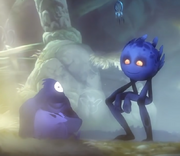