You've learned Double Jump! Press A to leap into the air, and press A again to jump even higher! - Ori and the Blind Forest

Double Jump is the fourth skill Ori learns. Ori receives this skill from Leru's Ancestral Tree, tucked away in Gumo's Hideout. It allows Ori to Jump again while already airborne, or jump twice (hence the name). The second aerial jump produces a characteristic "V" on screen which indicates that Ori has taken a double jump. This skill is required to continue exploring Nibel after Gumo's Hideout, and the extra jump also makes many pickups accessible that otherwise weren't. 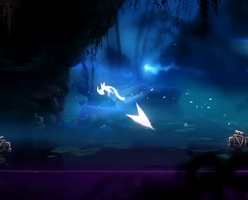 Retrieved from "https://oriandtheblindforest.fandom.com/wiki/Double_Jump_(Blind_Forest)?oldid=11517"
Community content is available under CC-BY-SA unless otherwise noted.