Bomb Slugs[1] are slimelike enemies that climb along the ceiling and drops down on Ori. It is black and has white eyes with orange-pinkish with purple spots on it's body, looks significently more bigger and bulges more than the other varients of slime, and looks if it contains liquid. Bomb Slugs can be found in Kwolok's Hollow and Baur's Reach.

It will crawl along the ground or any other flat surface, moving back and forth in a pattern and firing three pink glowing projectiles every three seconds, shuddering and slightly swelling while it does so. It will not pursue Ori upon nearing them. Upon contact or attack, the slime will steam and explode, causing 14 life points to be lost. It will fall on Ori if they are underneath it.

It is possible, though unlikely, for the Bomb Slug to fall or bump into hazards when moving in said pattern. This can be caused by the player bashing it into an area near a hazard.

Unlike other enemies, the Bomb Slug has low health, but high damage. A way to kill it without getting damaged is to Bash it onto a nearby hazard, or to attack with a ranged weapon.

The Bomb Slug moves slowly, inching forward by stretching out and recoiling, like a snail or slug. Usually, they stick out against the background, but in other cases they blend in , making them more hidden and more lethal. 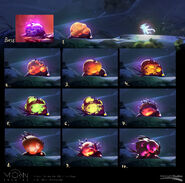 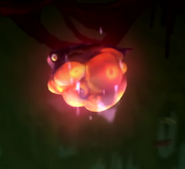 Retrieved from "https://oriandtheblindforest.fandom.com/wiki/Bomb_Slug?oldid=13625"
Community content is available under CC-BY-SA unless otherwise noted.