Will of the Wisps

"We're entering the domain of the great Baur. He sleeps ahead, weary from the long winter of the Decay. But the Memory of the Forest remembers the spring. Maybe we can remind Baur, too. If we can wake him."

—Voice of the Forest, upon entering Baur's Reach

Baur's Reach is a location found in Ori and the Will of the Wisps.

Baur's Reach is a place where the long winter arrived along with the Decay after the Spirit Willow died. It takes the shape of a mountain with the Spring Blossom tree on its peak. The area is frozen and covered under snow.

The path to Baur's Reach is first blocked by Baur himself, submerged in his dreams. Ori can wake the bear using Flap, which allow them to continue. The key abilities required during exploring the Reach are Light Burst and Flap combined with Bash. Flap is used to activate giant cauldrons, while Light Burst has a variety of uses (melting ice, activating lanterns and platforming). When Ori meets Tokk, they spot Shriek flying above. Tokk remarks that Shriek looked almost magnificent from a distance, then explains that Shriek started hunting the area when the winds turned cold and endless winter arrived.

Upon reaching the summit and finding the Memory of the Forest, Shriek appears and tries to attack Ori, causing an avalanche at the same time. She continues to chase the spirit as the escape continues. In the end, Ori falls and becomes trapped under the snow. Baur saves Ori and comments on the spring returning to the Reach. He says that Shriek may not welcome it, and proceeds to telling Ori her childhood story. 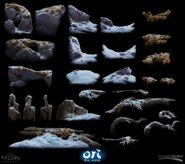 Baur's Reach concepts by Lina kit
Add a photo to this gallery
Retrieved from "https://oriandtheblindforest.fandom.com/wiki/Baur%27s_Reach?oldid=15294"
Community content is available under CC-BY-SA unless otherwise noted.