"We're entering the domain of the great Baur. He sleeps ahead, weary from the long winter of the Decay. But the Memory of the Forest remembers the spring. Maybe we can remind Baur, too. If we can wake him."

— the Voice of the Forest to Ori in Baur's Reach

Baur is depicted as a giant bear with brown fur covered in ice and snow. His eyes are glowing white.

When Ori attempts to obtain the Memory of the Forest, they find Baur in a deep slumber blocking the entrance to Baur's Reach. Using Kuro's Feather, Ori manages to wake the giant bear granting Ori access to the Reach. Baur tells Ori that he had dreamt of their arrival but that they are too late to do anything as the Decay had plunged the Reach into a perpetual winter burying the spring blossoms containing the Memory of the Forest at the mountain's peak. He then returns to sleep.

Baur also proceeds to inform Ori that Shriek would not welcome the changing climate of the Reach and also tells Ori the story of Shriek's tragic beginnings derived from his time spent dreaming. Baur is uncertain whether or not Shriek would escape the darkness of her earlier days but was optimistic that Ori's coming would bring about a new summer in Niwen.

Baur appears to have the ability to perceive events throughout time while dreaming, such as Ori's arrival in the Reach, Shriek's past, and Ori's future. Owing to his gigantic size, it is also evident that Baur possesses immense physical strength causing Ori to fly backward after sneezing due to Ori waking him with Kuro's Feather and being able to dig through snow caused by an avalanche to find Ori. 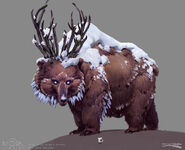 Add a photo to this gallery
Retrieved from "https://oriandtheblindforest.fandom.com/wiki/Baur?oldid=14992"
Community content is available under CC-BY-SA unless otherwise noted.