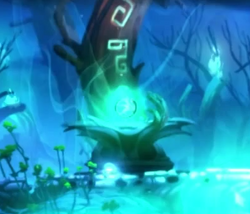 "Tatsu used to climb the mountains high atop Sorrow Pass... When her brother's torch faded, she fell into the mists, where she lost her path."

Retrieving Atsu's Torch and using it to relight the Shrouded Lantern is essential to the continuation of Ori and the Blind Forest, since this will grant Ori access to the Forlorn Ruins via the Gumon Seal.

Atsu's Torch is revealed fairly early on in the Misty Woods, but it can't be recovered until later. As Ori begins their journey through the area, Sein spots the Torch and suggests that bringing it to the Shrouded Lantern might clear the haze.

The Torch is mentioned when Ori receives Climb from Tatsu's Ancestral Tree, who became lost in the haze when it faded.

When Ori is able to collect the Torch, they must carry it back to the Shrouded Lantern. Upon arriving there and using the Torch to lift the mist, Ori will be presented with the Gumon Seal, allowing them to progress to the next area.

Retrieved from "https://oriandtheblindforest.fandom.com/wiki/Atsu%27s_Torch?oldid=14695"
Community content is available under CC-BY-SA unless otherwise noted.